During 2007 my father and I developed and self-constructed our very own camera crane. It is about 6 meters tall and has a motorized remotehead plus a small control screen for the camera’s view. Without pilots and prototypes we would have had to spend about 400€ though the real costs were much higher. 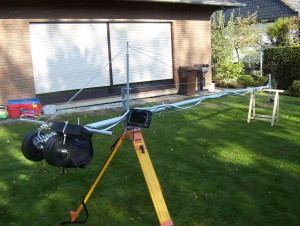 The camcrane’s main component is a common 5 meter flagstaff. The joint for pan and tilt of the staff is a swivel castor wheel bolted directly onto a strong tripod. On the flagstaff’s upper end there is a servo-motor-driven remotehead that can be controlled by a joystick attached to the other end of the flagstaff. The joystick was taken from an RC car’s control.  The camera’s picture can be observed live through a small monitor near the stand. 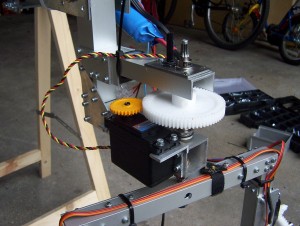 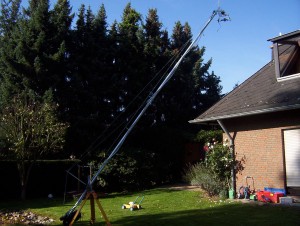 The flagpole consists of multiple segments which can be disassembled. This has the advantage of easier transportation, although it takes longer to set up – especially the trapezoid which levels the head as well as the horizontal cross booms need to be connected every time. The remotehead is designed for the Sony HC7, so a notably bigger camcorder may not fit and could affect the stability of the crane. To support power to the remote head and the display, we used two 9V car batteries which (together with a bar-bell) also acted as counter-weight.
Feel free to contact me if you have questions or if you want to use the crane in your project! Building one yourself based on our learnings will take some time but it is doable.

You can get an idea of the crane’s capabilities by watching the following clip (in the end, there is also footage showing the remote head in detail):

In the time since the construction of the crane, it had multiple appearances in my film projects: It contributed to several advertisement videos, filmed a school party and also was part of a documentary about a brass orchestra. Nowadays, you might probably use an off-the-shelf camera drone, but back then this crane really elevated the video quality and allowed entirely new perspectives.